The California Institute for Regenerative Medicine (CIRM) recently awarded $3.73 million to Mark Humayun, MD, PhD, University Professor of Ophthalmology, Cornelius J. Pings Chair in Biomedical Sciences, director of the USC Dr. Allen and Charlotte Ginsburg Institute for Biomedical Therapeutics, and co-director of the USC Roski Eye Institute. The funding will support researchers at the Ginsburg Institute as they develop a new treatment for dry age-related macular degeneration (dry AMD) –– a disease that has historically been considered difficult to treat. The grant is part of CIRM’s translational research program to propel California forward as a hub of regenerative medicine breakthroughs.

The treatment, an injection, is not a man-made drug, but is instead composed of molecules produced by healthy retinal cells cultured in the laboratory. The researchers have demonstrated that an intraocular injection of these molecules stimulates healing and slows down retinal degeneration in animals that would otherwise go blind. The team’s CIRM grant is intended to accelerate the project’s transition to the clinical trial stage, thanks to its potential to benefit society by filling an unmet medical need.

One innovation inspires another

Approximately 2 million Americans currently live with advanced forms of AMD, and more than 7 million deal with early-stage symptoms of the disease. Of those cases, nearly 90% are the dry form of AMD. The condition is characterized by the progressive deterioration of the macula, or the region of the retina responsible for the clearest, most focused vision in the center of one’s field of view. A single layer of cells under the macula called the retinal pigment epithelium (RPE) is responsible for nurturing the eye’s photoreceptor cells, which lie directly on top of the RPE and perceive light.

As the macula deteriorates and RPE cells die off, the photoreceptor cells necessary for vision gradually follow suit. Soon, patients begin to perceive a dark spot in the center of their visual field that can interfere with anything from reading to recognizing the faces of loved ones. The disease robs patients of both their eyesight and a great deal of their autonomy.

With the help of a CIRM Disease Team Therapy Development III Award, a team of USC Ginsburg Institute researchers recently used stem cells to develop a retinal implant composed of a single layer of RPE cells to replace the degenerating part of the macula. Amir Kashani, MD, PhD, assistant professor of clinical ophthalmology at the Keck School of Medicine of USC, and Humayun surgically placed implants in 15 patients’ retinas, and although the trial was only intended to assess the implant’s safety, the team observed early signs of therapeutic benefit and a few patients even regained some of their eyesight. That project currently is poised to enter a larger clinical trial phase with the goal of becoming the first ever FDA-approved treatment for late-stage dry AMD.

While testing the implants in animal models, the team made an intriguing observation: the implanted cells had a restorative effect not only in the exact location they were placed, but also on the surrounding retinal tissue.

The researchers attributed this phenomenon to something they call the paracrine effect: cells from the implant produce chemical messages that communicate with surrounding cells –– a process known to biologists as “paracrine signaling” –– which causes the degenerating native cells to behave more like the healthy, newly implanted ones.

The researchers asked themselves a key question: if these biological factors alone could have a restorative effect on a degenerating retina, could the team create an injectable solution containing the factors to complement the implant as an early-stage intervention for dry AMD?

So far, the answer appears to be yes. Cells used in the implants are grown in the lab in a nutritious broth called the media, and as they grow, the molecular factors they produce are released into the media. By harvesting that factor-filled fluid and delivering it as an intraocular injection, the team has already seen success in dramatically slowing down the progression of retinal cell loss in animal models of retinal degeneration. The team’s long-term goal is to develop a therapeutic injection for early-stage patients to slow disease progression, while patients whose diseases have progressed to the point of blindness can receive implants.

Sights set on a future cure 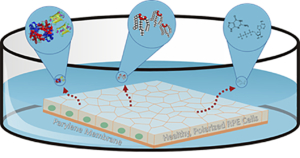 Now that the researchers know this media holds promise as a therapeutic injection, the next step is to fully characterize its components. While the team has narrowed down the number of potentially therapeutic molecules in the media, no single constituent seems to have a strong effect on its own, meaning the factors may work together in a synergistic way to restore retinal function. Funding from the CIRM grant is meant to expedite the process of characterizing the media and creating a stable, reproducible therapeutic injection for eventual use in humans.

Kabir Ahluwalia, a graduate student in the USC School of Pharmacy working on the project, explains that this research holds particular promise for those estimated seven million early-stage patients making up the majority of dry AMD cases. Early-stage AMD patients can currently benefit from specific nutritional supplements that slow down disease progression by about 25%, but many patients still need additional therapy. This novel injection of soluble growth factors could potentially serve as an ideal future treatment to prevent vision loss and provide renewed hope for these patients.